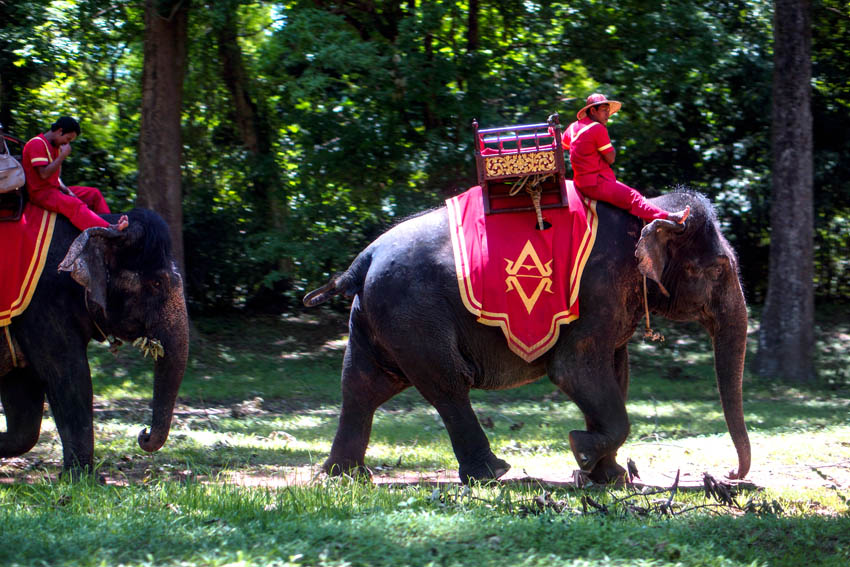 During my last tour day in Cambodia, I was able to see elephants in the forest before going to the temples. Lucky me! We stayed at Angkor Miracle Resort and Spa. It’s a bit far from the city (around 10 minutes away) but if you want good service plus peace and relaxation, you’d want to stay here. I love their cozy rooms, the pool and they really have good food! 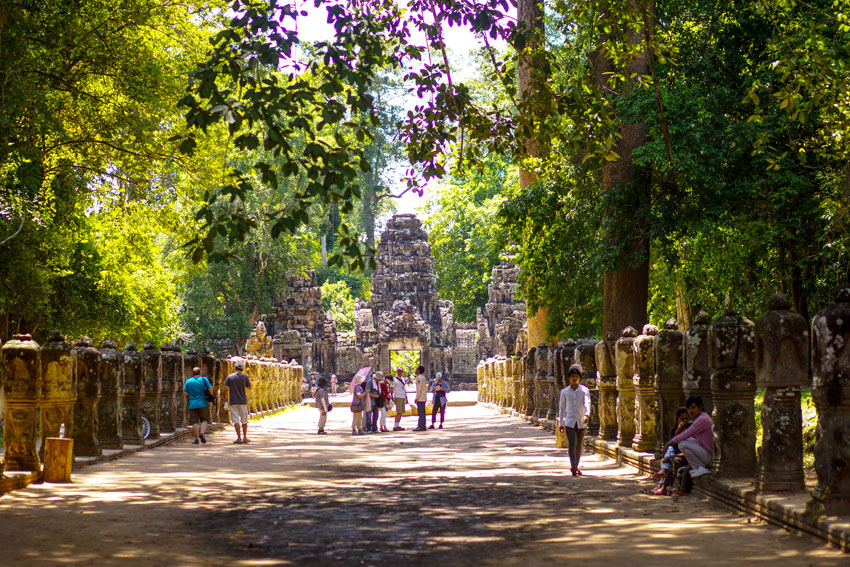 First destination on our list: Preah Khan temple. It was also built in the 12th century and it located Northeast of Angkor Thom. This was the area for their substational organisation, with over 100,000 officials and servants. 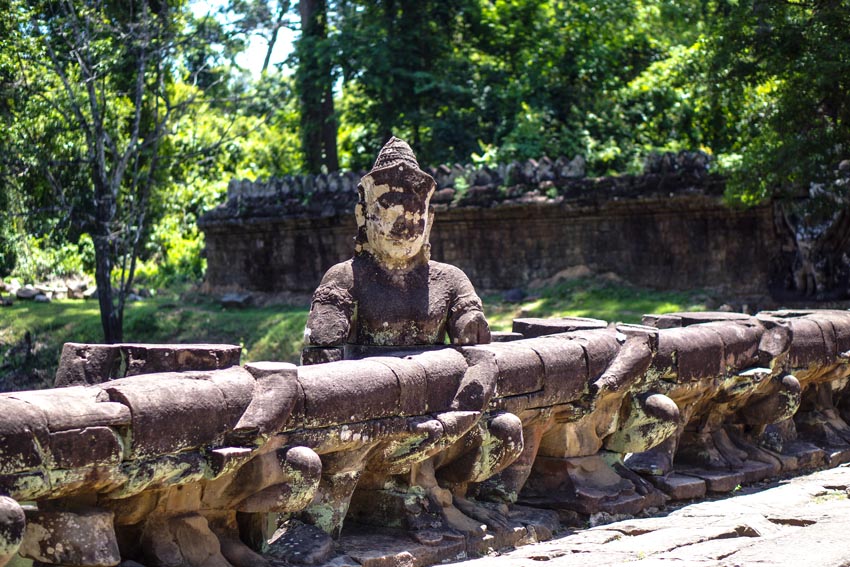 Almost all the heads and bodies of the statues at the entrance were cut off, except for a few, like this one. 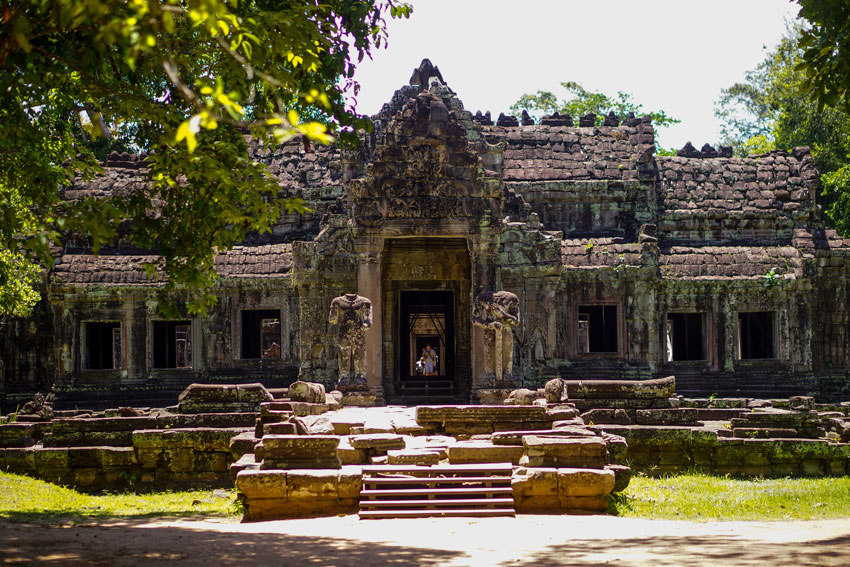 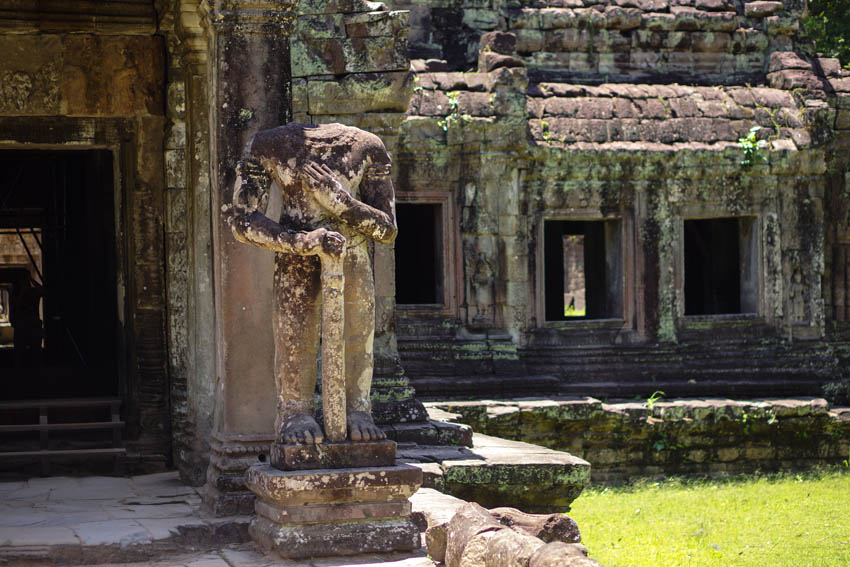 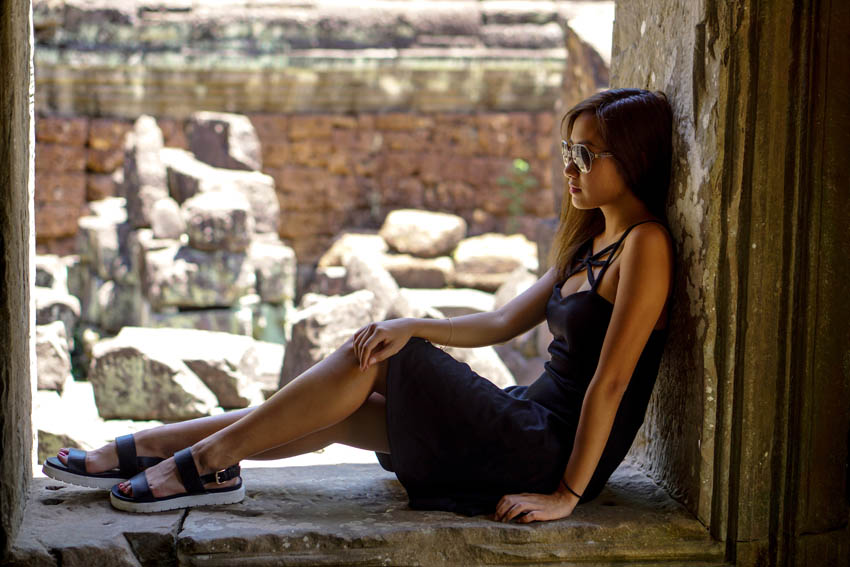 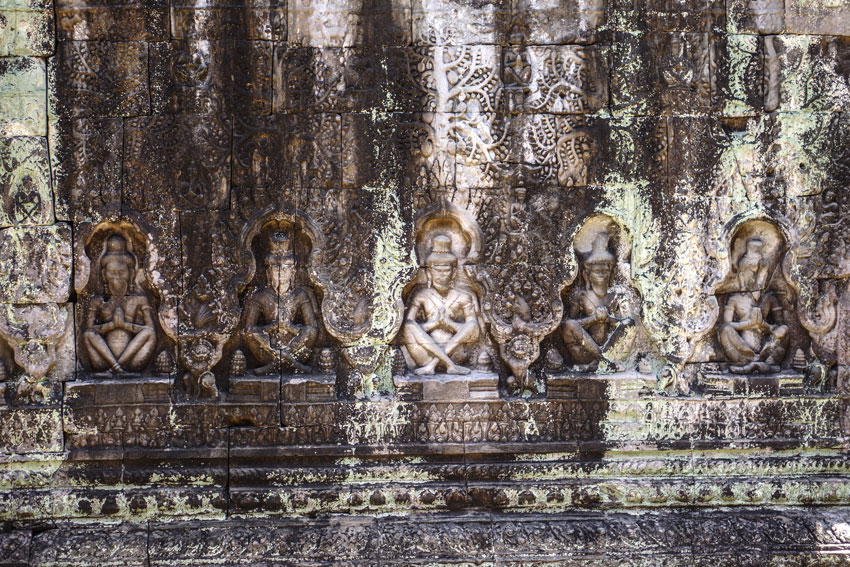 The details on the walls are just amazing. Until now, I still wonder how long it took to build these temples. 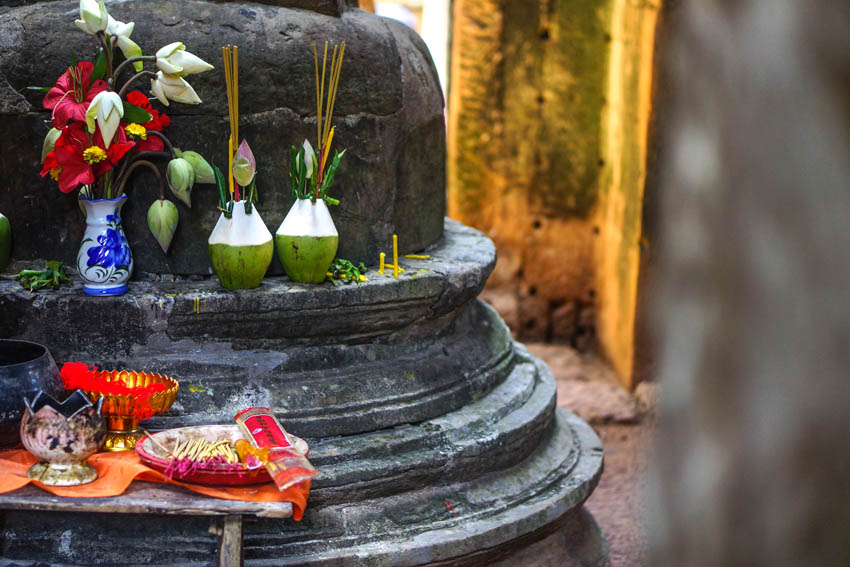 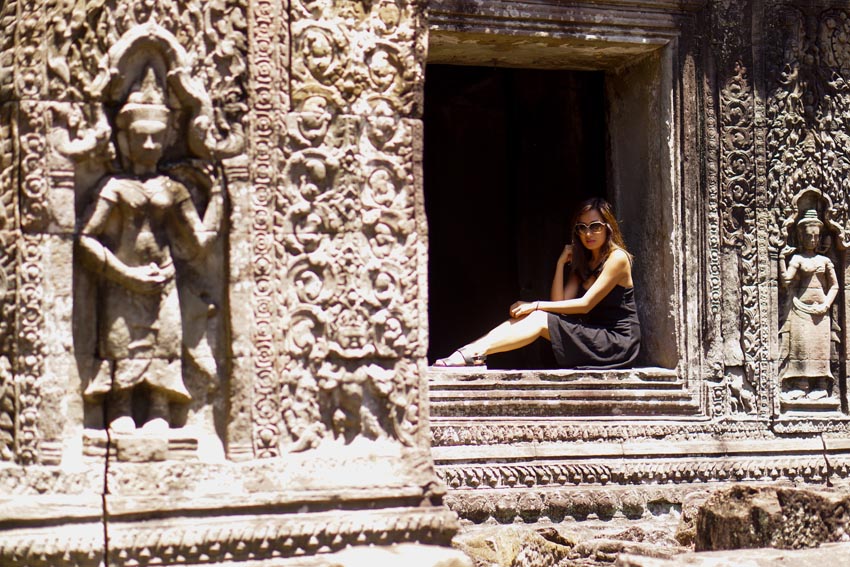 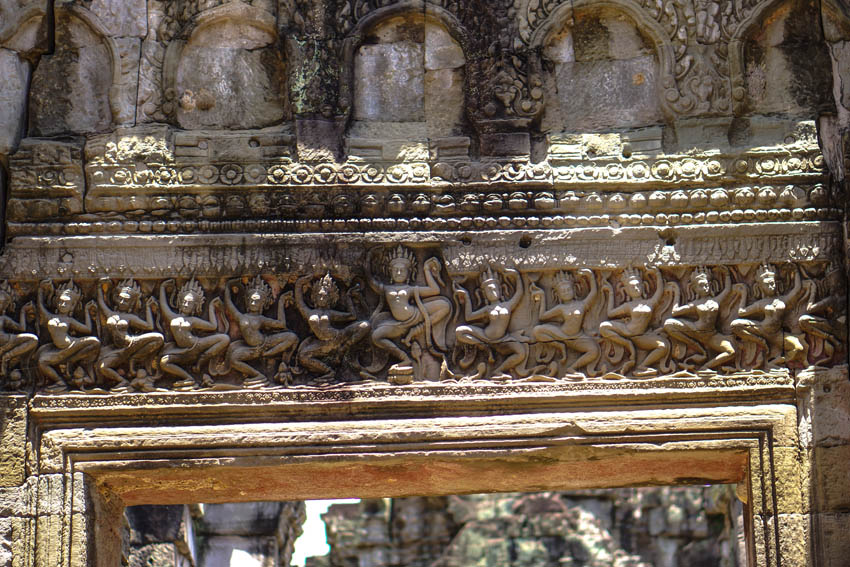 According to my tour guide, this area used to be their dancing room. 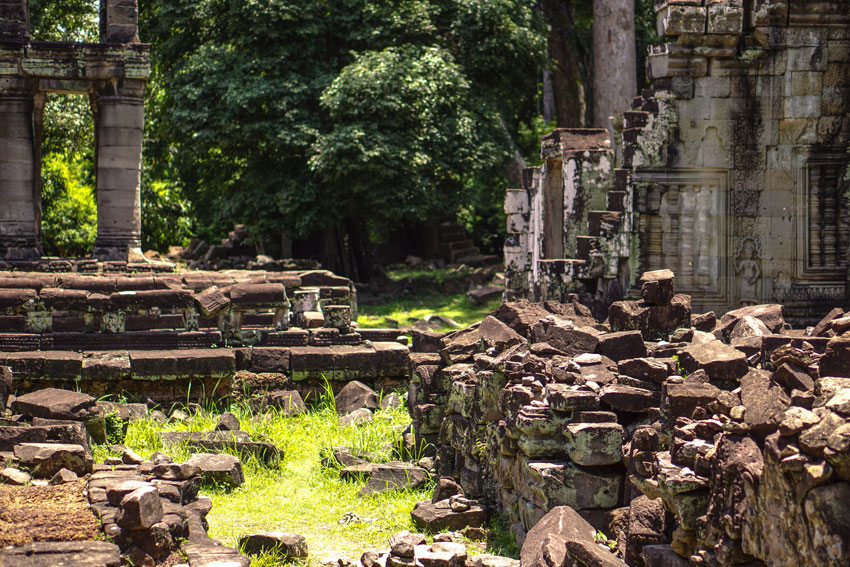 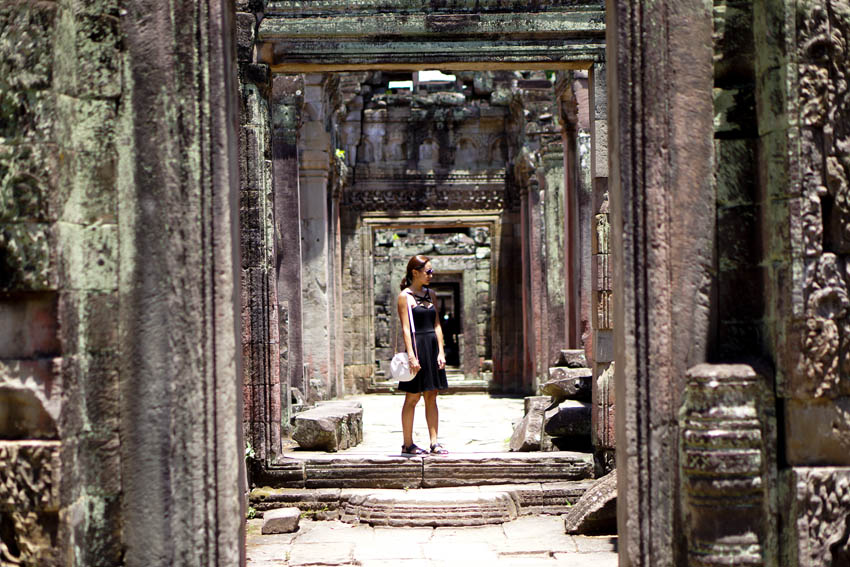 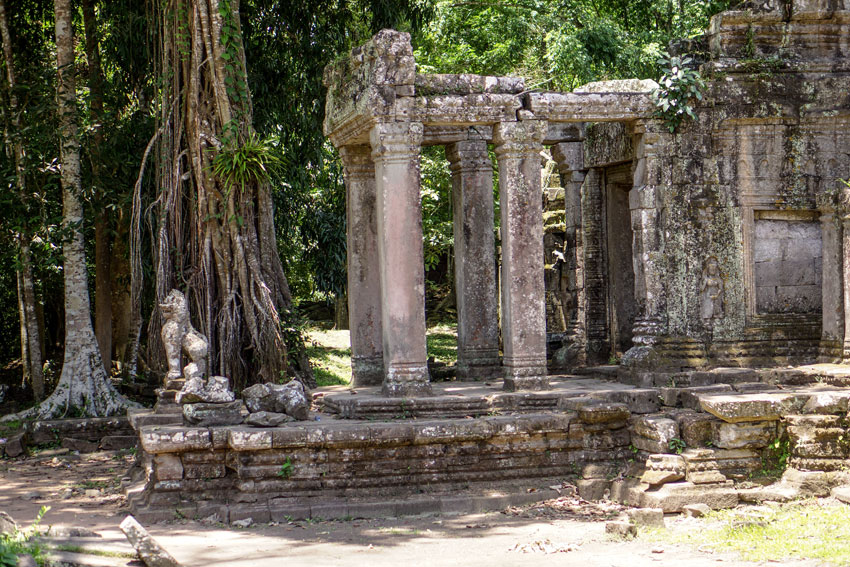 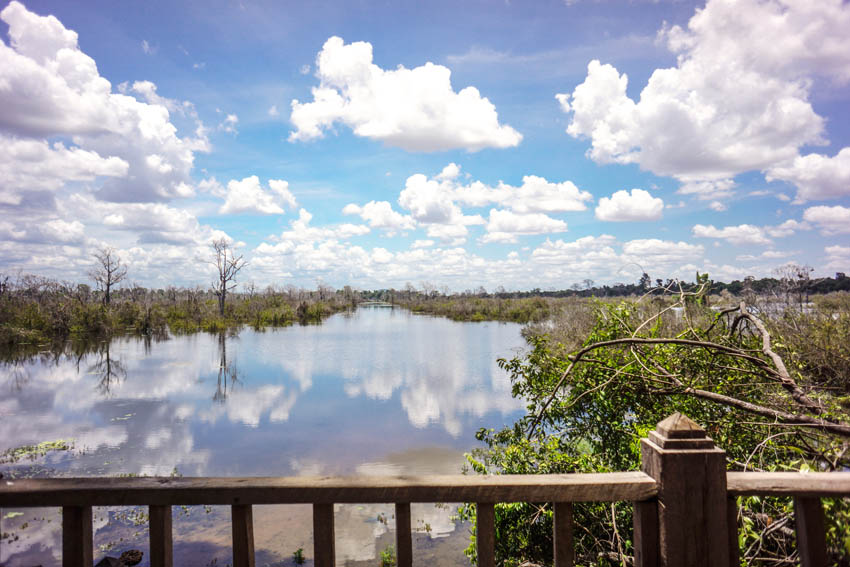 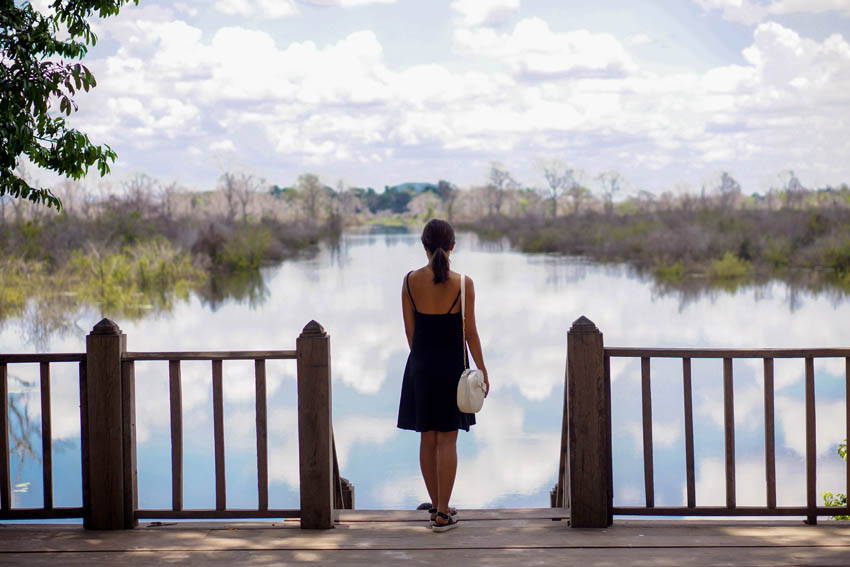 We stopped over this beautiful man made river in Angkor Thom. I think I spent about 30 minutes just staring at this unbelievable view. 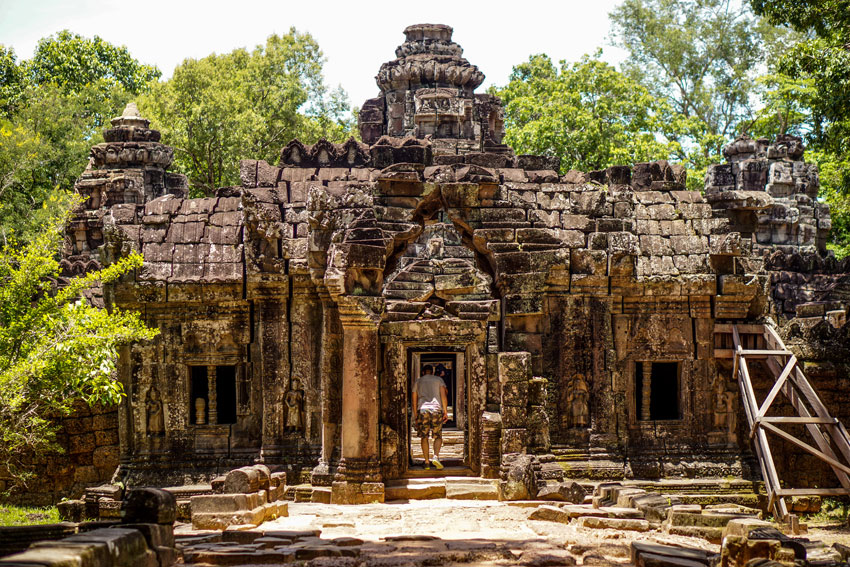 Next stop: Ta Som temple, which means ancestor temple too, says my tour guide. The King during the 12th century dedicated this temple to his father. It has a single shrine located on one level and was surrounded by laterite walls. 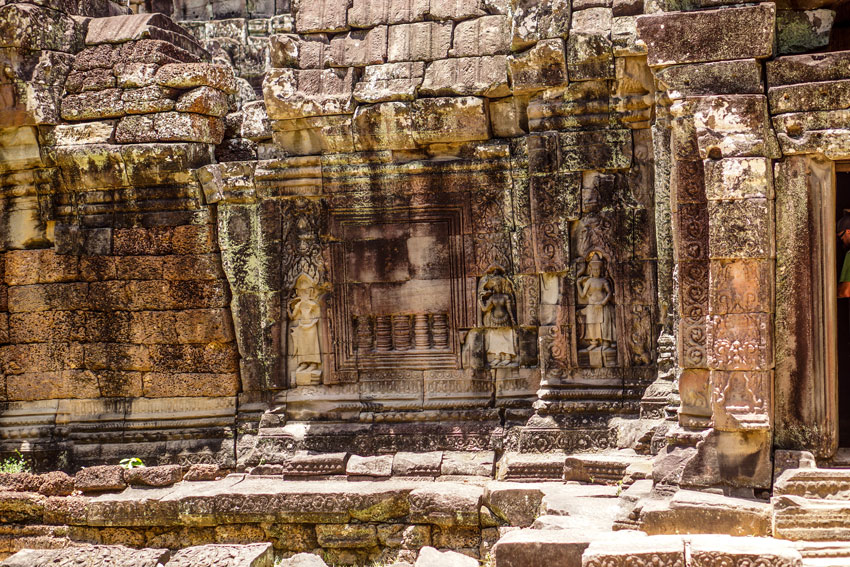 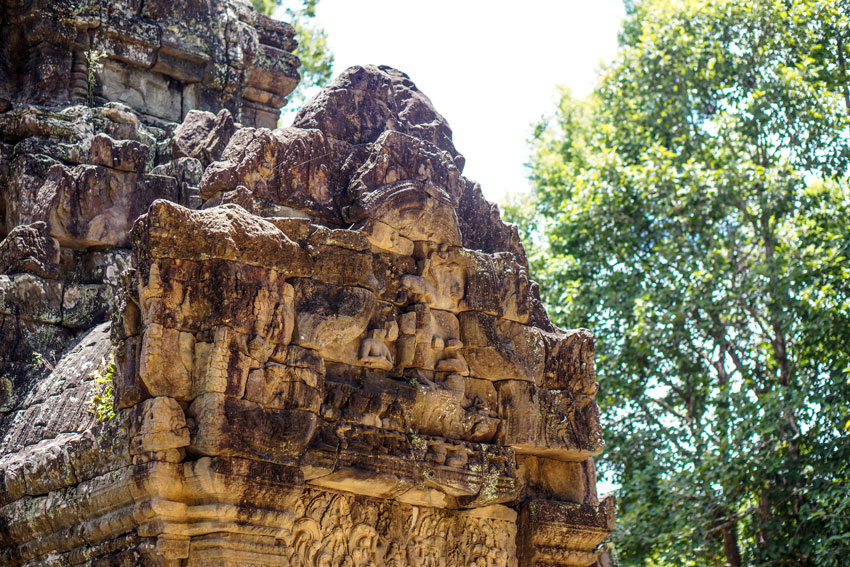 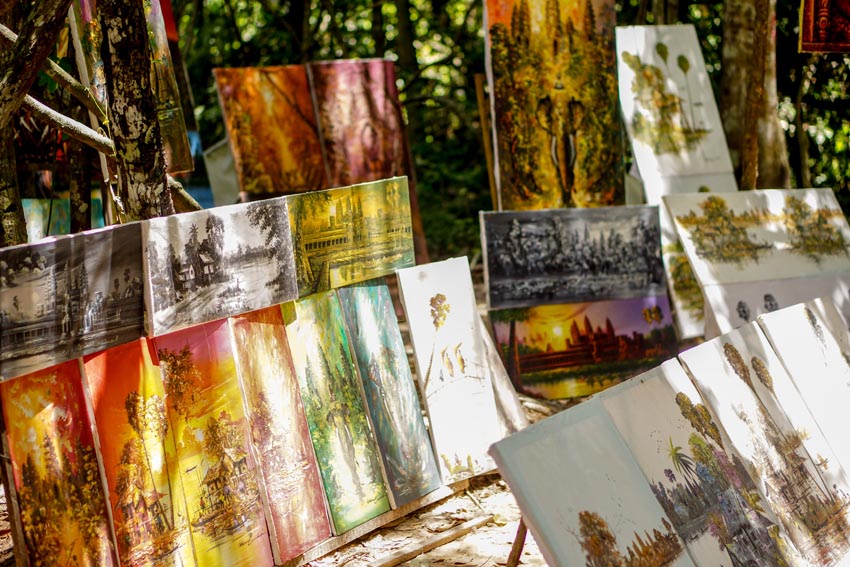 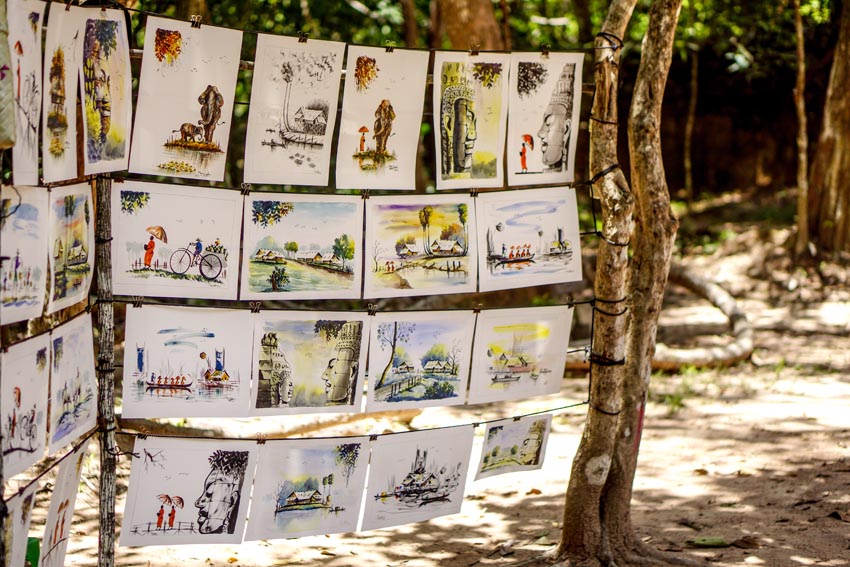 Here are some beautiful paintings, sketches and souvenirs that are being sold everywhere. I spotted these as I finished visiting the temples. 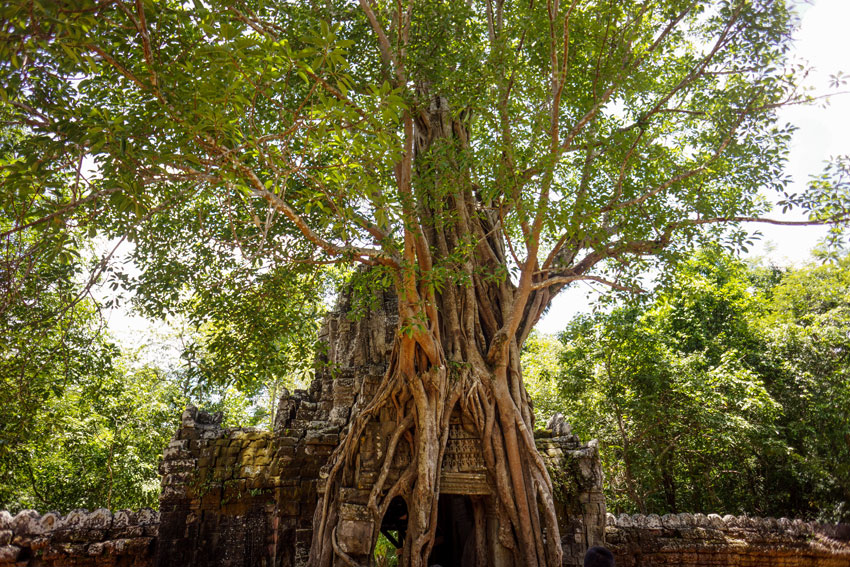 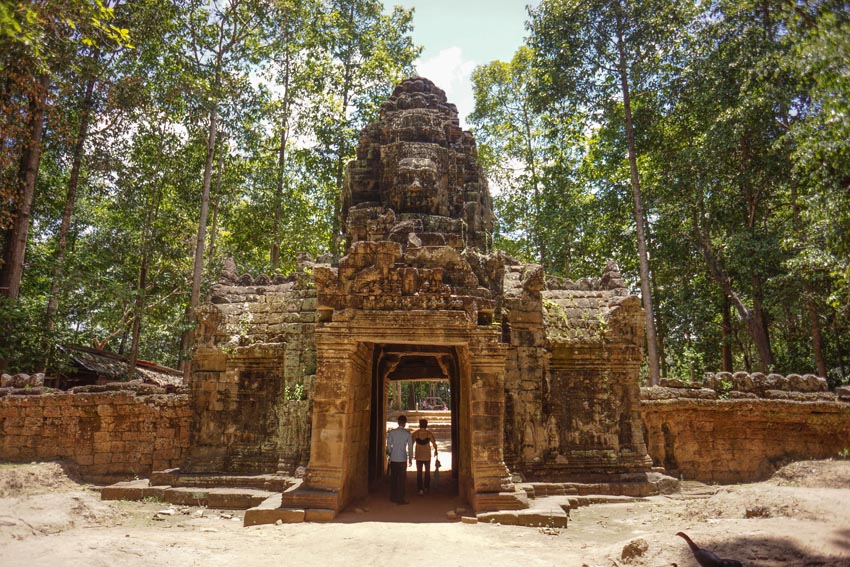 Ta Som has two sets of gopura or entrance ways. This is an example of a gopura- it contains a small rooms on each side and has four faces above just like Bayon Temple. 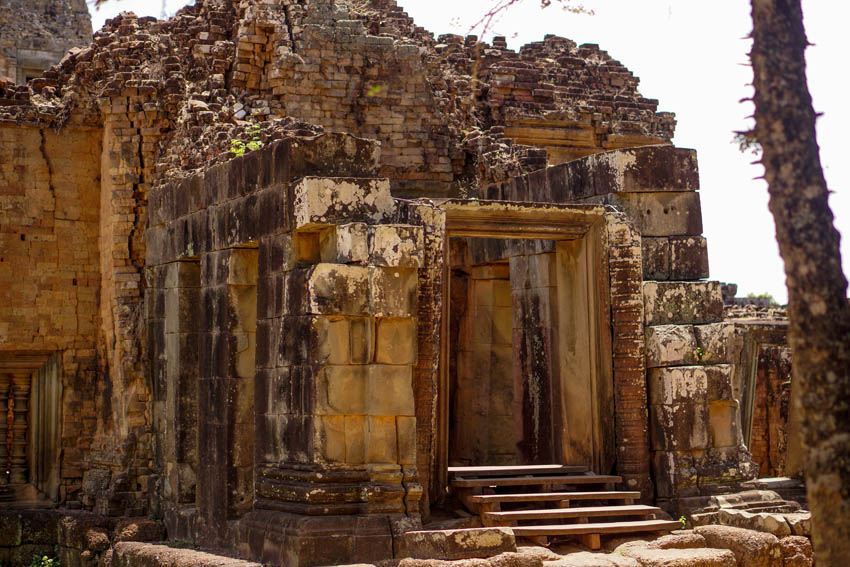 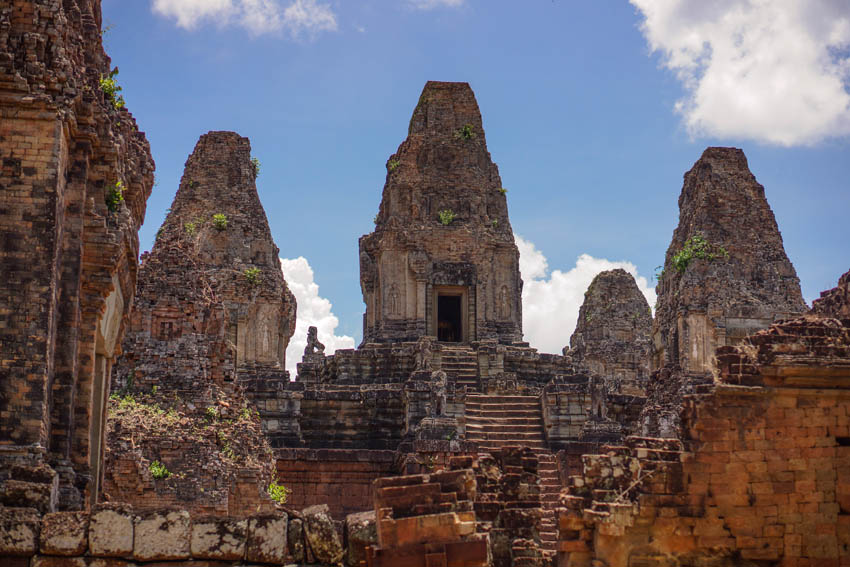 Last stop: Pre Rup Temple, which means “turn the body”. Scary name, I know! Their belief is that the Cambodians’ funerals are directed here, with the ashes of their body being rotated in a lot of directions as the service progressed.

Street food!!! It’s like our dirty ice cream with pandesal here in Manila. 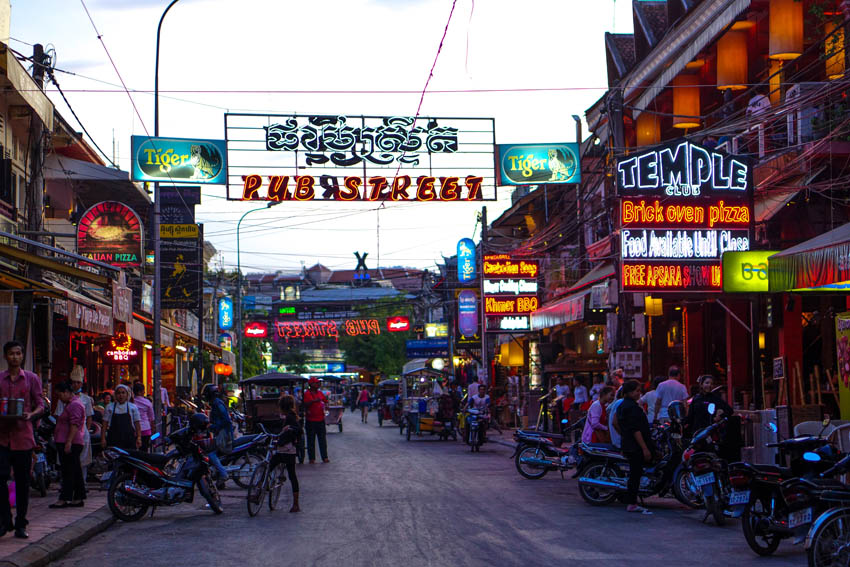 After all the temple running, we went to the city and checked out Pub Street. It’s their “gimikan” and I love everything in there- everything is so affordable and yummy. They sold beers for $0.50 and had dishes for only $4.00!

The best restaurant I found: Triangle BBQ Bar. They have the best grilled Khmer food and everything is so tasteful. I also tried their foot massages worth $1.00 for 10 minutes, $2.00 for 20 minutes and $3.00 for 30 minutes. How awesome is that! It’s so cheap, especially for foreigners because I know massages are expensive in the USA. 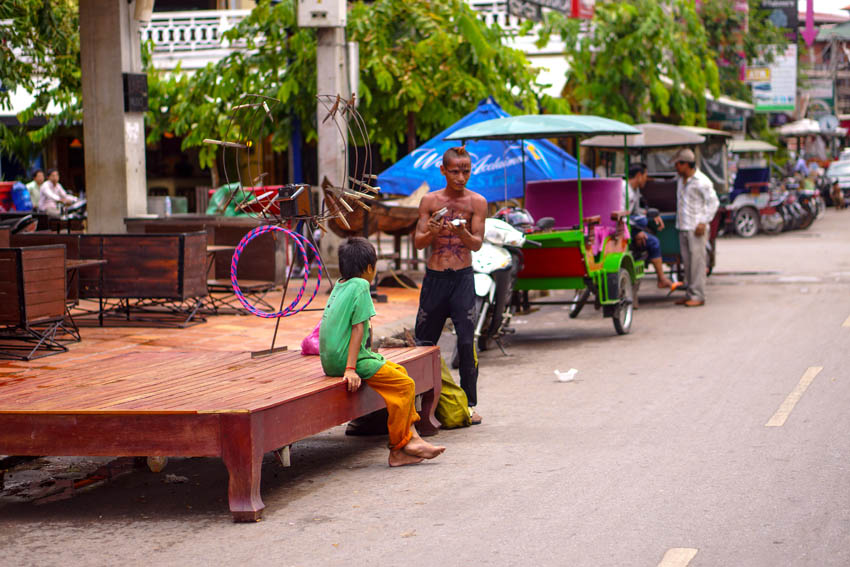 My favourite street food: Nutella-Banana pancake. If I’m not mistaken it’s only $1.00 and it’s tastes soooo good! My mouth is watering right now. 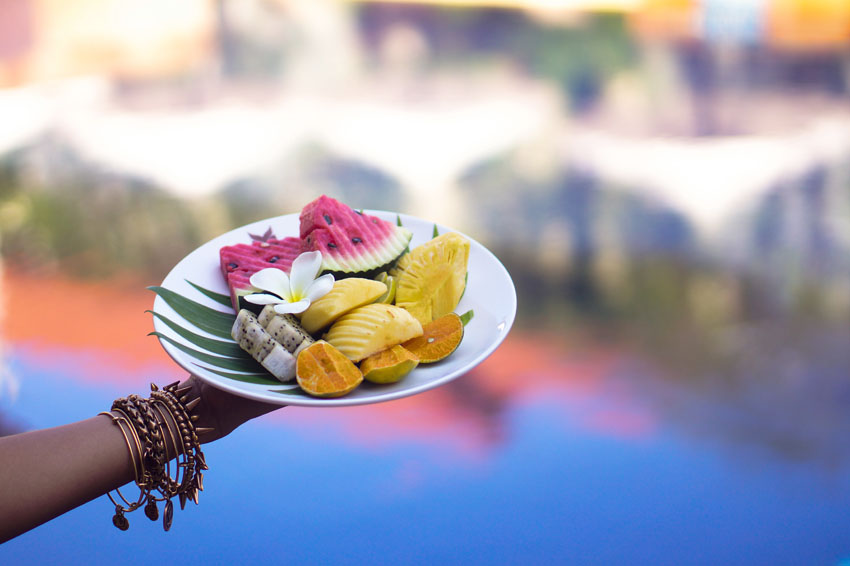 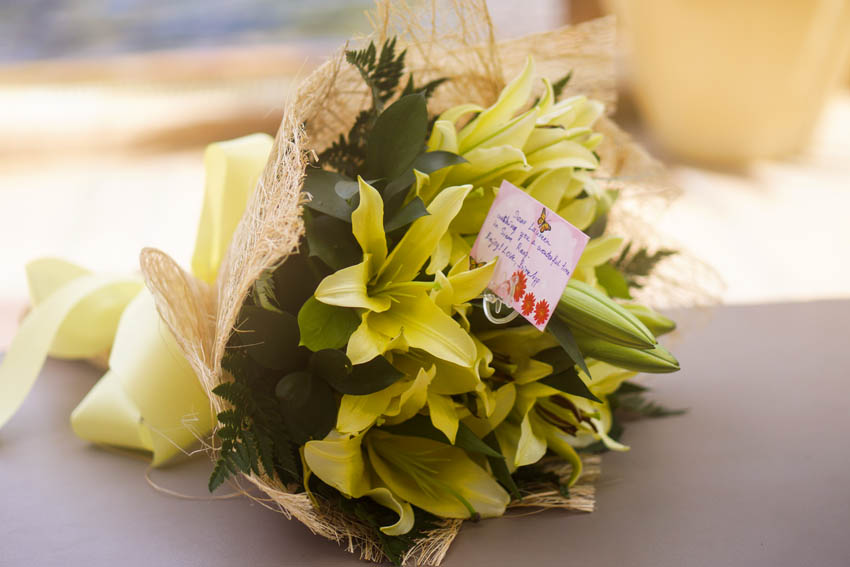 Thank you so much Prime App for arranging this entire trip. I really had an awesome time! Everything I’ve experienced in Cambodia is amazing. Cambodia is really a place you have to see at least once in your life. I know I’ve said it before but it really is. Next time you plan an adventure trip, try going to Angkor and do include my travel posts to your itinerary! BMS. 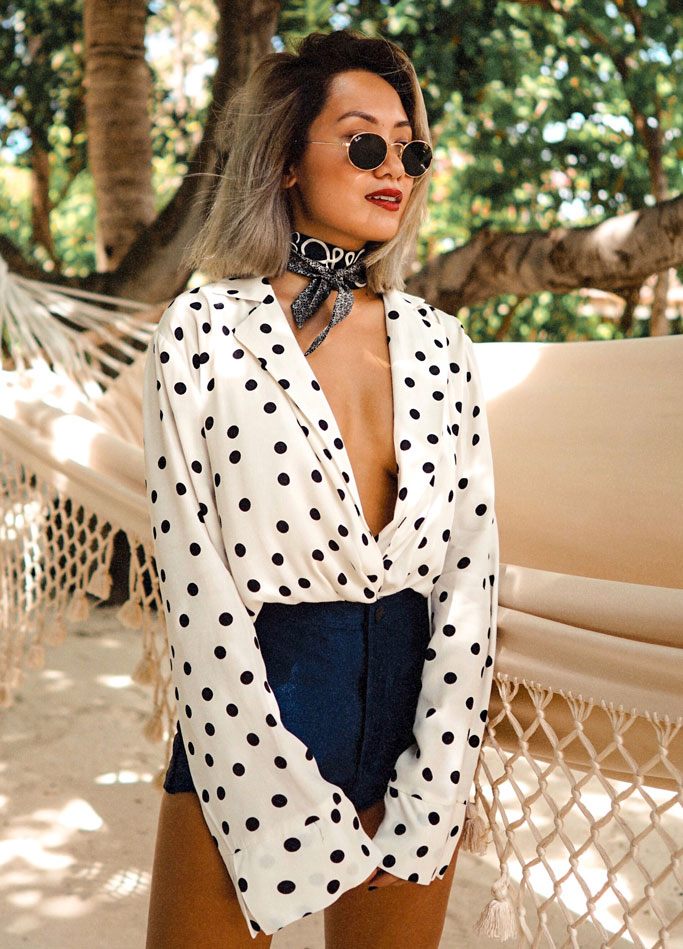